China’s Liaoning province in Manchuria, with its capital city Shenyang, recently became Chinas third free trade zone. The city of Shenyang is well-known in China for its commodities and industrial production. It has about 9 million citizens within the core-city and more than 60 million people within its greater limits of the region Liaoning. During the past Olympic Games, the city hosted soccer games in a newly build stadium, as some people will positively remember.

In terms of business, the city proudly highlights its successful technology park, hosting international manufacturers and production facilities. This technology park has developed very well over the last years and became an important landmark for the region, which resulted in positive recognizance from Beijing. Premier Li Keqiang, who was a former governor of this province, knows very well about the qualities of this region and its people. Shenyang has become a key development zone for international trade, industrial production, and related high-tech innovation programs in the coming years and will also closely work together with Venionaire Capital.

“We believe this city has the potential to become economically as successful and recognized as Shanghai is today and we are proud to be one of the very few selected European partners to make this happen. European companies have great opportunities in China, but for a market entry, you need trustworthy local partners in both regions, governmental support, and direct investments from the European headquarters of the companies. Shenyang supports all these factors, which sums up to a fantastic opportunity to accelerate businesses in China”, says Berthold Baurek-Karlic, Managing Partner (CEO) of Venionaire Capital after an official meeting with Songlin Li, who is a high-ranking politician in Shenyang.

Baurek-Karlic visited the region together with Venionaire Partner Alexander Rapatz (on the picture left). Right now, an innovation center for “internet of things” (IoT) and robotics is being built and managed in collaboration with the managers of alocal technology park, where European talents and high-tech companies will be invited to work closely together with Chinese partners to find the right suppliers and jointly address needs of local markets for corporate clients.

China Daily News (29-30th April) wrote a cover story on “Innovation lifts SOEs, Li says”. Notably, Premier Li Keqiang stressed that the government will improve SOE (State-Owned-Enterprises) regulations and policies as much as possible to help unleash their growth potential. SOEs are a very important innovation driver in China and those have recently presented their latest top-tier innovations from companies like China Mobile, Aviation Industry Corp of China, and China Merchants Group at Hanxingyuan Science Park in Beijing. In this article, Li says

“Entrepreneurship and innovation are key to survival for small firms, and will lead to prosperity for large-scale enterprises”.

China has understood the values of entrepreneurship and is quickly adapting to new schemes and rules of innovative economics – this also counts for sustainable collaborations with innovations leaders from Europe as we have experienced at first hand. 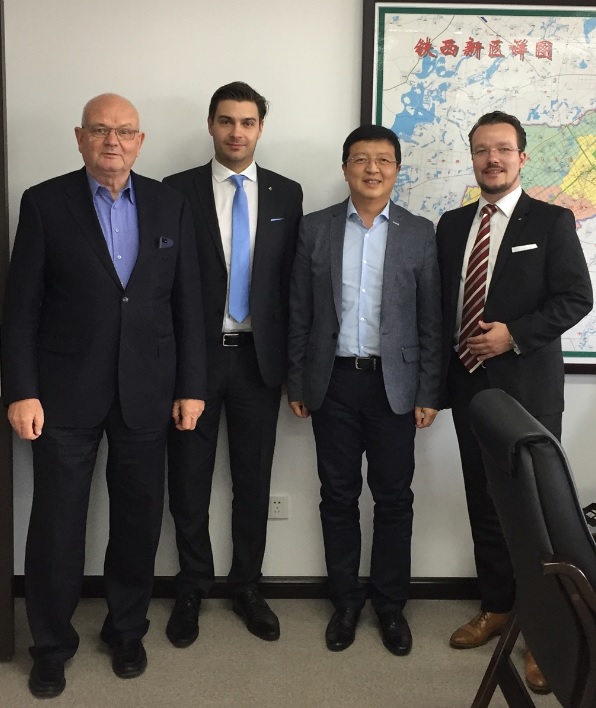 Venionaire met representatives of a technology park in Shenyang.

Investment and Growth in China

China has a professional track-record when it comes to government-owned private equity funds (so-called “state funds”), but as times are changing, traditional investment strategies need to be thought over. China has an obvious interest in strategic fields such as Automotive, Aerospace, Infrastructure, and Clean Energy as the country aims to become innovation independent by end of the 2050’s.

Europeans usually look rather critical or at least differentiated at the current buyouts of such foreign state funds. In some industrial fields, European companies have lost their former innovation leadership role and are struggling for survival. In these cases, European Bankers argue it’s better to sell them than to let them go bankrupt. Those companies have value, as they are often considered highly competitive in other parts of the world. However, those companies usually do not remain innovative and therefore often have only value for a short period of time.

Venionaire has a different approach. We love high-tech and we strongly focus on the future of industries and adoptions of technologies (changing value chains and market mechanisms). We focus on a sustainable strategy rather than just advising on buying tech companies and bringing them to China. A good signal for such sustainability is if European Investors s join a strategic investor, such as a Chinese state fund. We believe it would be much more sustainable to invest in such firms, merge them with young innovative start-ups and build a new technology leader from a strong basis, which would bring a longer-term value to Chinese investors and to the European economy at the same time. The single Chinese market is huge and in fact accessible if you have the right partners and state-owned-enterprise clients at hand. Our Chinese partners understand this approach very well and are willing to give way for “smart money” investments.

Foreign companies and service providers are offered a variety of economic incentives and are heavily supported by Shenyang’s major technology park. Politicians such as Songlin Li always saw a great chance to make Shenyang a true success story and it already has developed quite impressive.

If you are interested in visiting and expanding to this region or believe that your company could benefit from this market – we are happy to be fabian.greiler@venionaire.com(your partners) for a successful link and the start of an amazing business story in China. We are also actively advising on investments for the expansion to this region if needed.

Corporate Startup Engagement (CSE) – A Guideline for your Success