It is a deep crisis that we experience now due to Covid-19 global pandemic. We will have to prepare for a long and intense venture-winter, funding will be harder to get and down-rounds will be the new normal. Many founders are now wondering how ther startup valuation will change. Some analysts we have spoken to predict a 25% to 30% shutdown quote of great startups within the next 6 months and string effects on global economy and costs of the new economy. France (EUR 4.3 Billion!) and German governments cover (high-valued) startups well and show the world that those are great places for ventures. Those governments did not hesitate and provided a safety net for their startup hubs. In Austria we have nearly a billion Euro worth of investments and governmental grants, which have been invested over the last decade, at risk. Some mechanisms are in place, but those measures do not compare to Germany or France yet – key-players of the ecosystem are still fighting for additional programs. Our current government is startup friendly and we are positive that high-valued startups could be covered in Austria soon as well.

Company valuations – see Venture Capital Method, First Chicago Method or Payne Scorecard Method – especially startup valuations – remain an art based on experience. The numbers about down-rounds in this article reflect the current market view, based on feedback our valuation and transaction specialists gathered through interviews last week. The findings show clearly a drop in market sentiment. Less investors are willing to invest and if they still do, they will aim for bargains and discounts. Investors and key-players of the industry are preparing startups and their peers for down-rounds all over Europe. Terms and conditions of investments will get tougher. Valuations and risk-premiums will find a new level as supply and demand – looking at investors and great startups – is shifting far away from a healthy equilibrium. Those willing to invest during the crisis are only a few, while there are much more startups in need of financing due to a drastically reduced runway as business eroded for many. White Knights will be perceived more like high-risk taking sharks – that’s the honest truth, if you like it or not.

The impact on valuations

We need to be careful what kind of startups and businesses we are looking at. Some fall back in their business case (see “Scenario – Slow”), others will win (see “Scenario – Speed”) and some will simply manage to not lose any clients, (see “Scenario – ZERO”). Winners face a much faster market adoption – within only 3 months, they sign as many costumers as it was expected for 12 months prior – this gives them a tremendous boost.

Winners of the crisis might sign revenues or freemium clients – as catching them via freemium models was necessary due to competition or a matter of managing their on-boarding. Investors will review contracts of those new sign-ups carefully, as they need to understand how sustainable and long-lasting those client relationships will be. A stronger position to negotiate shall not make founders bold, we need to be realistic, reduced multiples on valuations compared to last year will apply – simply because of less investors and more demand on the market.

Companies which are hit hard will have two choices – they will either become a zombie or reinvent themselves and become heroes. After all, all heroes have overcome hurdles nobody believed could be taken!

Possible scenarios for the startup ecosystem

I prepared a very high-level calculation to show the impact of this crisis to startup valuations, using three scenarios – a “Scenario – Base Case”, “Scenario – Slow” and “Scenario – Speed”. The underlying assumptions are as follows: During the “base-case” scenario we have 18 months runway and 10% month on month growth, being a winner of the crisis “Scenario – Speed” this will accelerate to 30% for three months and 20% in the 4th month and in “Scenario – Slow” numbers drop by 30% for two months in a row and 20% in the third. “Scenario – ZERO” indicates what happens if you manage to at least not lose any clients (due to pausing service contracts, or memberships). 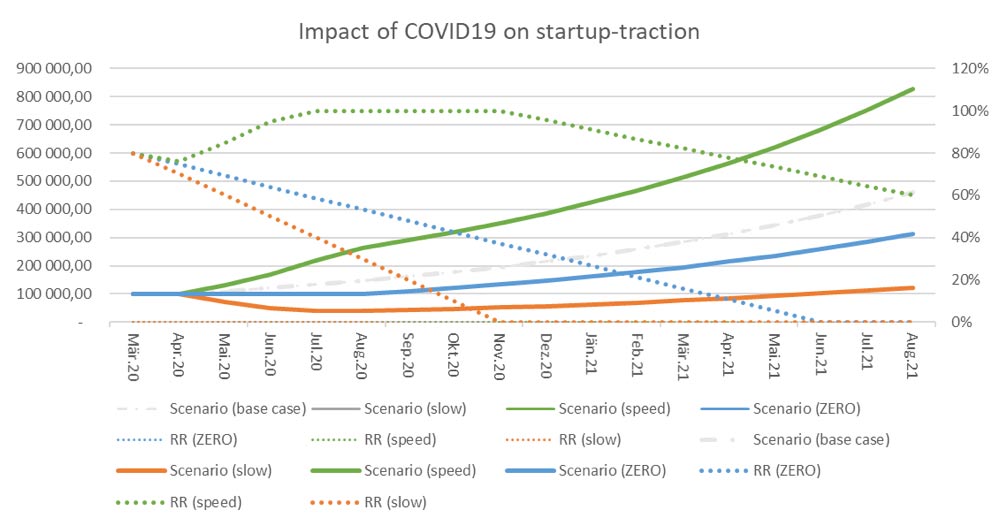 This simple chart shows that only 3 months accelerated business and normal growth thereafter, will likely catapult a startups signups (or revenues) much above the original base case (“Scenario – Base Case”). Keeping costumers and simply not losing any will reduce your growth-momentum by roughly 30%, in comparison, losing business for 3 months will cost you roughly 80% of your momentum and a down-round will be out of negotiation.

Looking at the runway (RR) of those scenarios – we see that keeping costumers without growth will cost 3 months, while acceleration of business obviously will extend your runway. A drastic slow-down on the other hand will cost you 12 months and will cause immediate trouble. Considering that most startups have not closed a round right before the crisis and keeping in mind seasonality of investments, I would assume that two thirds of the startups are now desperately seeking funding and have roughly 2 months on average to close a deal. The average time to get into negotiations and close a deal is roughly at 6 months (or even 9 months depending on the sector and region). You do not need to be a genius to realize that this is not working out. Even if all investors would sit at the table (and they don’t!), we’d still lose some of the best startups out there.

Nevertheless for those remaining, this market dynamic will result in a drastic cut in valuations for companies with slowing businesses. We expect to see cuts of over 50% and tougher terms. Higher liquidation-preferences (multiples 2 to 3x) will be the new normal. We estimate for startups, which kept their customer base at least at the same level or at reduced growth to face, discounts of up to 30% and tougher terms in addition. Winners will need to expect up to 20% discounts on valuations, considering the new balance of supply and demand and tougher terms as they will be the new normal.

Exemptions from this will certainly exist, but I’d be careful with media stories as the devil usually lies in the detail and sits in the small-print on paper in a drawer. Those startups, which are able to present a clear survival or even growth strategy, while offering the right balance of terms and valuation – will win investors, even in times of tougher competition. Relations of advisors, existing investors and friends will pay off more than ever, as the most difficult part will be to get the attention of any investor these days.

Personally, I feel it is wrong to try to start a moral discussion on this topic. Both, founders and investors, need to accept market dynamics. We all know markets are based on the simple concept of supply and demand. Now, as there are more startups in desperate need of funding and less investors willing to invest, because of truly uncertain developments we will witness valuations dropping by roughly 30% even for healthy startups or scaleups. There are enough opportunities for each investor out there, everyone may pick a cherry and there is no reason to overpay.

It is a difficult position for founders to be in. I agree and I understand that this is hard and I know there are some heavy discussions and negotiations coming up. What really worries me, is the amount of “Zombie-Startups” (surviving at a minimum, not strong enough to grow). Startups will be forced to make extreme cuts, release talent and lose all their momentum. Valuations will drop drastically in this case, as I will show below. 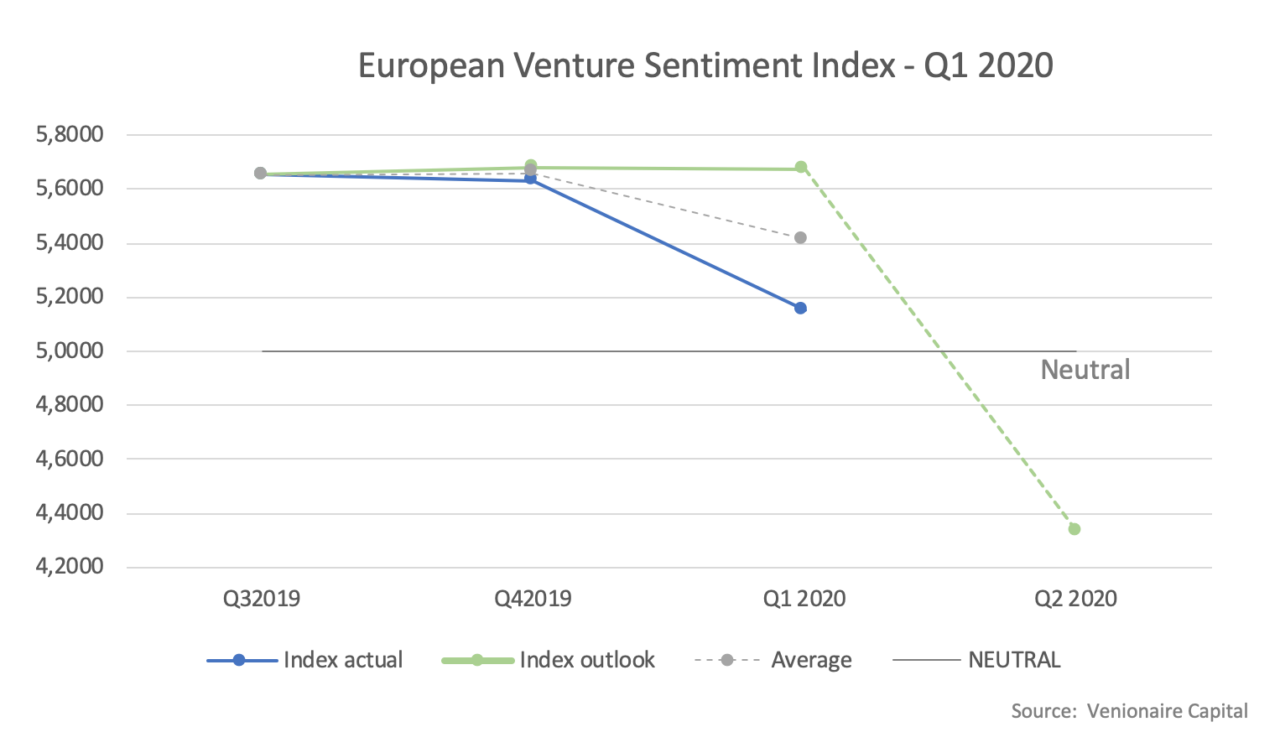 Obviously, a Zombie is better than a write off and for a very young company this is less of a problem. I know companies that turned into a bootstrapped company after only one angel round and they survived all their competitors. Luckily, let´s say they won because of their incredible endurance. The questions is really, if our economy can afford such a hammer to a sector which is supposed to make its economy future proof? I’d say no! Governments need to consider co-investment facilities or rescue funds – just like France and Germany introduced them – to keep companies running, without losing all of their momentum. The next generation of technologies is developing and society is changing significantly at the moment, either in your country or in another one, and the government makes their decision today, if they care or not.

Berthold Baurek-Karlic is Founder and CEO of Venionaire Capital, with many years of experience as a serial entrepreneur, corporate finance expert and early-stage investor. He supports the startup ecosystem in various roles such as President of the European Super Angels Club, Board of Austrian Private Equity and Venture Capital Association and General Secretary of Business Angel Institute.