Attracting investment and successfully closing a funding round is a milestone for any startup. And news of an investment deal is usually a reason for the entire ecosystem to celebrate – it tells founders that there’s funding out there, and it tells investors that there are worthwhile opportunities.

For both investors and startups, keeping abreast of the latest investment deals – particularly in their niche or location – is very important. Every time a deal is announced, it gives an insight into the current state of the market. What prices are realistic and in which way are they trending? Nobody can negotiate well without having an eye on the overall market.

Keep an Eye on the Market

That’s why we support DealMatrix Deals Monitor and conduct quarterly surveys on European Venture Sentiment Index at Venionaire Capital. The Deal Monitor by Dealmatrix is an excellent tool to keep track of the latest deals without having to jump between various different news sources. More importantly, it will foster startup ecosystems by increasing startups’ visibility and attracting the attention of potential stakeholders.

This list of the latest and hottest deals (both in Europe and worldwide) is updated every week. If you have news of a deal to share, this can be done via the submission form here.

We’ve already populated the Deals Monitor with plenty of deals going back to 2020. To celebrate its launch, here’s an overview of some of the highlights from 2020 and the first quarter of 2021. 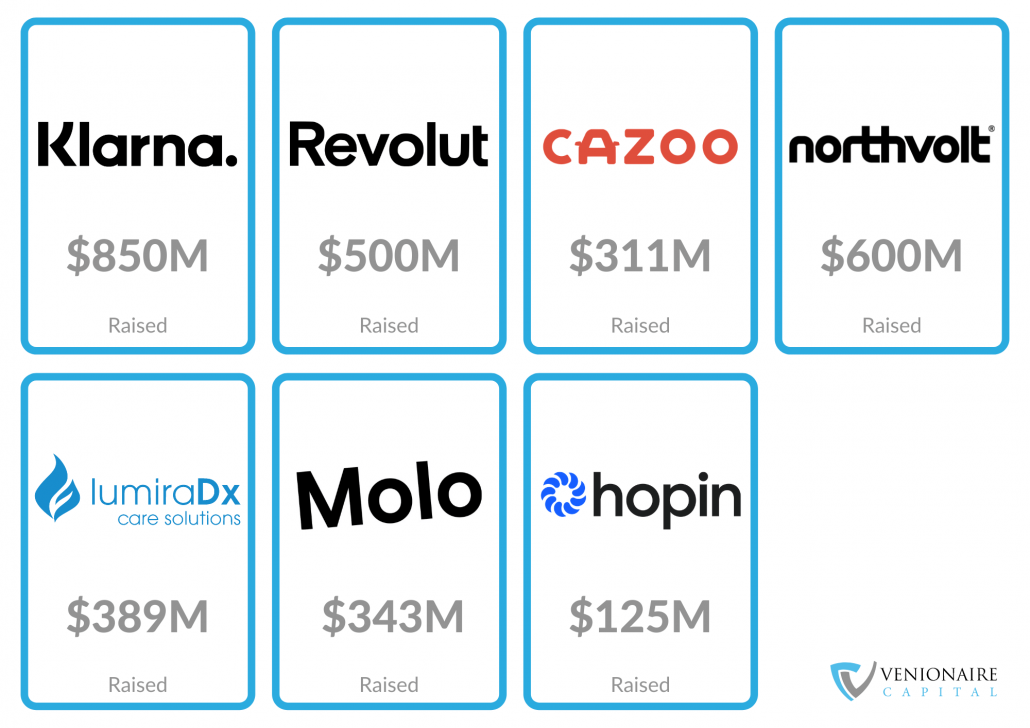 A Busy Year of Investment in Europe

Despite the pandemic, it was another busy year of investment in Europe. Although there were fewer deals than in the previous year, there was more cash flowing than ever. According to KPMG’s Venture Pulse Q4 Report,

VC investment in the continent rose to a record $49 billion in 2020. The gain was particularly driven by bigger later-stage deals.

According to figures in the atomico State of European Tech report for 2020, Fintech was the sector that attracted the most investment across the continent. Leading the way here was Klarna, which raised $850 million across two rounds in September, with its valuation hitting $10.6 billion. The year also saw Revolut raise a round of $500 million.

Mobility also provided a couple of big numbers. British startup Cazoo completed a Series D of $311 million. The car retailer’s deal was particularly impressive, as it was only its second year of operation. Also noteworthy was Northvolt, a Swedish EV battery company, which raised a round of $600 million.

Several remarkable deals came out of the United Kingdom, for example, a $389 million round for digital health company LumiraDx. And another Fintech company, London-based software provider Molo, raised $343 million.

One of the big European venture capital stories to break towards the end of the year was a $125 million Series B round for Hopin, an event software company that has continued to explode since being founded in 2019. With a valuation of $2.1 billion, it thus became a unicorn. 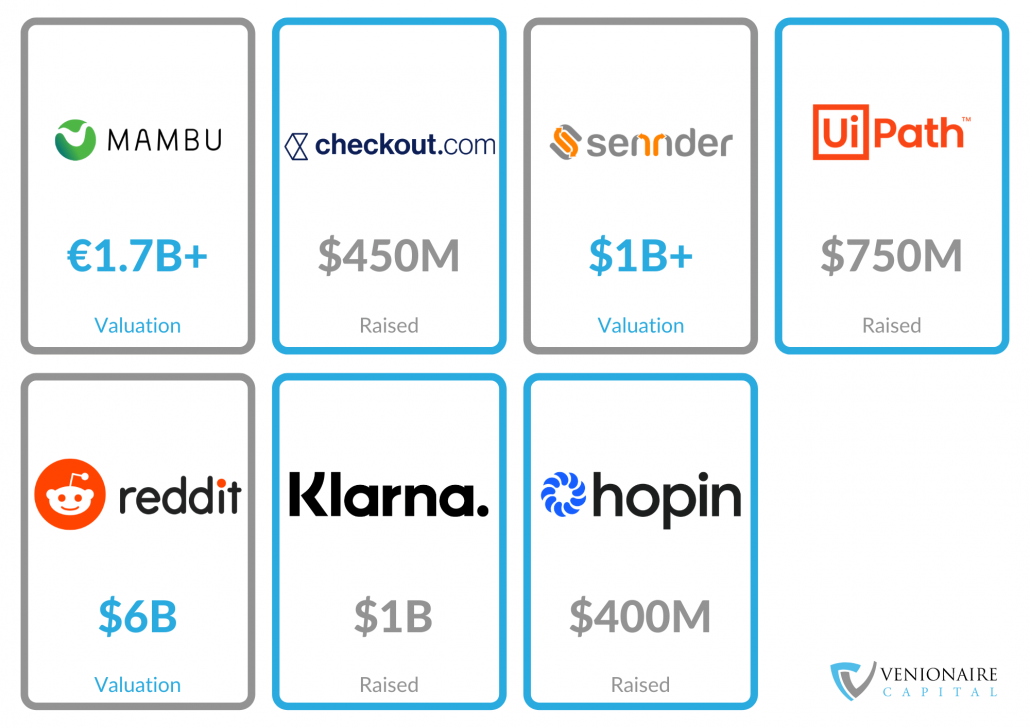 A Strong Start to the Year

2021 started in exciting fashion with news of another European unicorn, Berlin Fintech Mambu, hitting the Deals Monitor in the first week of January.

Then, just a few days later, the UK’s checkout.com became EMEA’s most valuable venture-backed business, after raising a $450 million Series C at a valuation of no less than $ 15 billion.

Germany provided another unicorn in the shape of Sendder, as the logistics startup’s Series D pushed its valuation beyond the magic billion.

February began with a really huge figure: $750 million. That was the amount raised by UiPath (Now a US company, it has its roots in Romania.) in its Series F. The valuation? $35 billion.

A noteworthy deal came around a week later in the form of a $250 million Series E investment for Reddit, which set its value at $6 billion. (Although not a European deal as such, it’s one every investor should have on their radar given the well-documented role Reddit has had in shaping markets in recent months.)

And the big deals just kept on coming, many of them building on already impressive deals from 2021. Another round for Klarna hit a cool billion dollars. Hopin closed a $400 million Series C in March.

As this flood of news suggested, the first quarter of 2021 has seen a continuation of the trends from 2020: an increase in the size of later-stage deals driving a steady stream of very large numbers in the Deals Monitor feed. Crunchbase reported that:

global investments reached $125 billion for the quarter alone – almost double that of the corresponding period in 2020.

Put it down to the pandemic, new technology, risk appetite or a combination of all of that, but there’s a lot of money being invested right now. It’s worth noting that this isn’t limited only to venture capital and startups, but it’s a wider trend – just look at the craze around SPAC investments, for example.

There’s a lot to keep an eye on right now, but you wouldn’t want to miss anything at this exciting time for investors and startups. While we will repeat this highlights reel on a quarterly basis — lookout for another at the end of Q2 — make sure you follow European Venture Sentiment Index updates and favorite the DealMatrix Deals Monitor now!

Professional Investors and the SPAC boom: Proceed with Caution